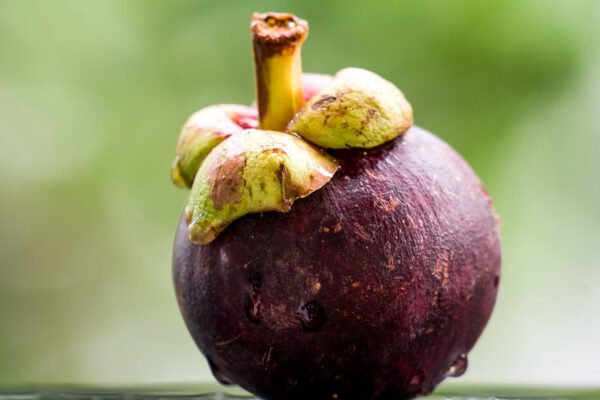 Mangosteen aka “The Queen of Fruits” is one of our favorite fruits of all time!  And it is no coincidence that we chose mangosteen as our company logo! Mangosteen is originally from Southeast Asia but can be found in various tropical regions around the world. Mangosteen not only tastes INCREDIBLE  but it also is second to none when it comes to benefits!

Another reason why mangosteen fruit is so expensive is because it is one of the hardest fruits on Earth to grow. Basically for a tree to spout their flowers, all conditions must be perfect! Not good, not great… PERFECT! Many locals of Thailand believe that growing mangosteen is more of an art than anything and take their jobs very seriously.

It takes seven to ten years before a tree is able to produce any mangosteen fruit.

Mangosteen is a super fruit that has been harnessed for centuries for therapeutic and nutritional purposes in South East Asia. The fruit is used to treat infections, Irritable Bowel Syndrome, diarrhea, dysentery, and even wounds. It is a POWERFUL antioxidant, anti-inflammatory, antibacterial, antimicrobial, and antiviral!

Don’t confuse the mighty mangosteen with mangoes. Mangoes are a delicious fruit with LOADS of health benefits, but they pale in comparison to mangosteen. Studies found that mangosteen may inhibit the advancement of several types of cancer cells. Mangosteen acts as a free-radical scavenger and reduces the potential damage the low-density lipoproteins have on the human body. Mangosteen has at least 20 known xanthones that are found in the pericarp (fruit wall) of the plant.

Studies show that Mangosteen may slow down the progression of prostate and colon cancers and may help in the treatment of skin cancer.

Mangosteen is also utilized as a natural way to ease pain and discomfort caused by inflammation.  It is extremely good for your heart, known to regulate menstruation and relieve cramps.

Mangosteen has astringent properties that are excellent in defeating bacteria and viral infections!

Studies have proven that mangosteen is also a powerful defender against allergies. One study in Japan compared a current allergy medication with mangosteen and found that the mangosteen performs better as an inhibitor in the release of histamines and prostaglandin. Mangosteen is gentler on the liver and kidneys than many prescribed medicines. The plant does not meddle with the body’s blood clotting abilities, nor does it hurt the kidneys, liver, or cause stomach ulcers.

Mangosteen has the strongest free radical scavengers of any other fruit (including durian and rambutan) The queen of the fruits is a hypoallergenic substance which repairs and protects skin cells from damage. It is also full of the powerful antioxidant, Catechin which helps tighten skin and reduce the appearance of fine lines and wrinkles. Because mangosteen is also fantastic at fighting bacteria it is also known to help get rid of acne and other skin conditions. Eating mangosteen is for sure the tastiest way to protect your skin!

All this and much more!

Random AF: Turn a mangosteen upside down and you will see brown raised ridges that look like flowers. The number of the “petals” corresponds with the number of sections in each mangosteen. In other words, you know how many sections are inside a mangosteen just by looking at its bottom. How cool is that!? : )

How to Know When Mangosteen Is Ripe:

Mangosteens will generally arrive to you ripe and ready to eat. When mangosteens start to ripen, the rind will turn reddish-purple. The rind will be hard but should have a slight give to it!

How To Eat Mangosteen:

To cut open a mangosteen, use a sharp paring knife, make a horizontal cut around the middle and twist off one half of the shell, exposing the white, creamy flesh. (Knifeless? No problem! Hold the mangosteen between your palms and squeeze your hands together to crush open the purple shells. Once the shells are cracked, you can easily peel them off!