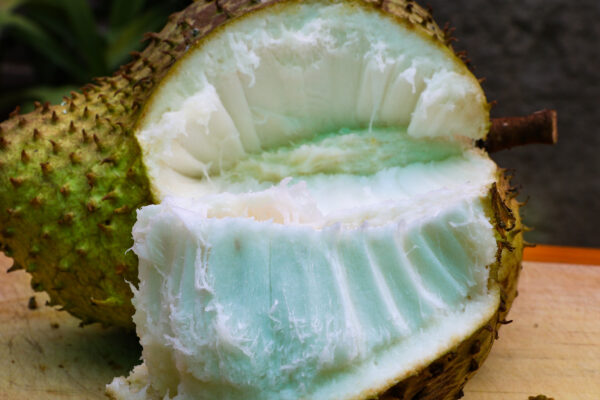 Soursop is truly one of the delicacies of the fruit world. It tastes like a combination of strawberries, pineapple and banana, with sour citrus flavor notes, contrasting with an underlining thick creamy texture. And it is absolutely heavenly!

Soursop is also known to be one of the MOST powerfully healing foods on earth!

Soursop contains antioxidants, and is widely known that it may help kill cancer cells. It is antifungal and antibacterial, boosts your immune system, improves gastrointestinal health, and stabilizes blood sugar levels.

One of the greatest side effects of consuming soursop is its ability to reduce inflammation. Chronic inflammation is usually caused by the presence of free radicals in the body. These are reactive compounds that result from the breakdown of food. When these compounds continue to exist within the body, they irritate tissues, which leads to inflammation. Chronic inflammation has been associated with cardiovascular diseases, cancer, diabetes, chronic lower respiratory disease, stroke, Alzheimer’s disease, and nephritis. Soursop contains an important array of antioxidants that neutralize free radicals, thereby stopping their oxidative properties and significantly reducing inflammation in our body.

Besides fighting inflammation, soursop has antimicrobial properties. This means that eating soursop on a regular basis can help kill disease-causing organisms and thus reduce our chances of getting infections. Soursop is also known as an all natural safe alternative for keeping infections at bay after medical and dental procedures.

While soursop has traditionally been used in the management of diabetes, it is only recently that studies have shown the fruit actually works! A study found that those who eat soursop significantly have lower blood sugar levels than those who do not. According to the study, soursop works because some compounds in it likely inhibit the working of enzymes responsible for breaking down complex carbohydrates. Soursop could also reduce blood sugar levels by inhibiting the absorption of glucose into the bloodstream. The study also found that consumption of soursop leaves reduced the effects of oxidative stress associated with diabetes. Soursop may also stimulate growth of insulin-producing cells within the pancreas.

Do you Wanna know more about Soursop? When is it ripe?, how to cut it? – Click here